Last week Jake, Sylvan and I ventured to the border with Scotland to put together a large house frame we have been building for Andy and Sue a couple of miles from Gretna Green. 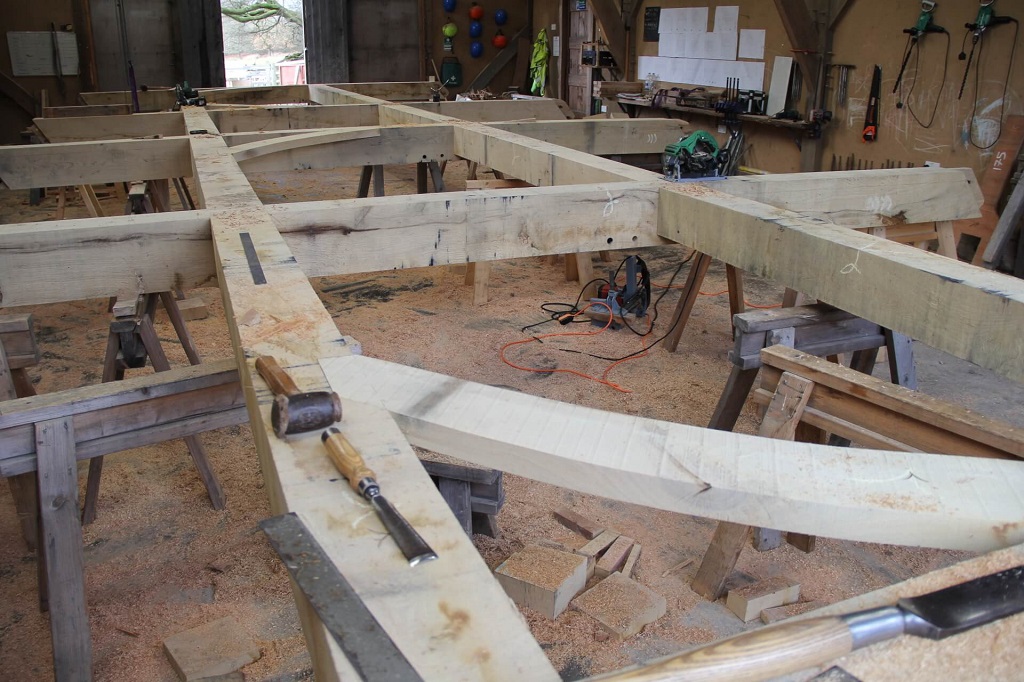 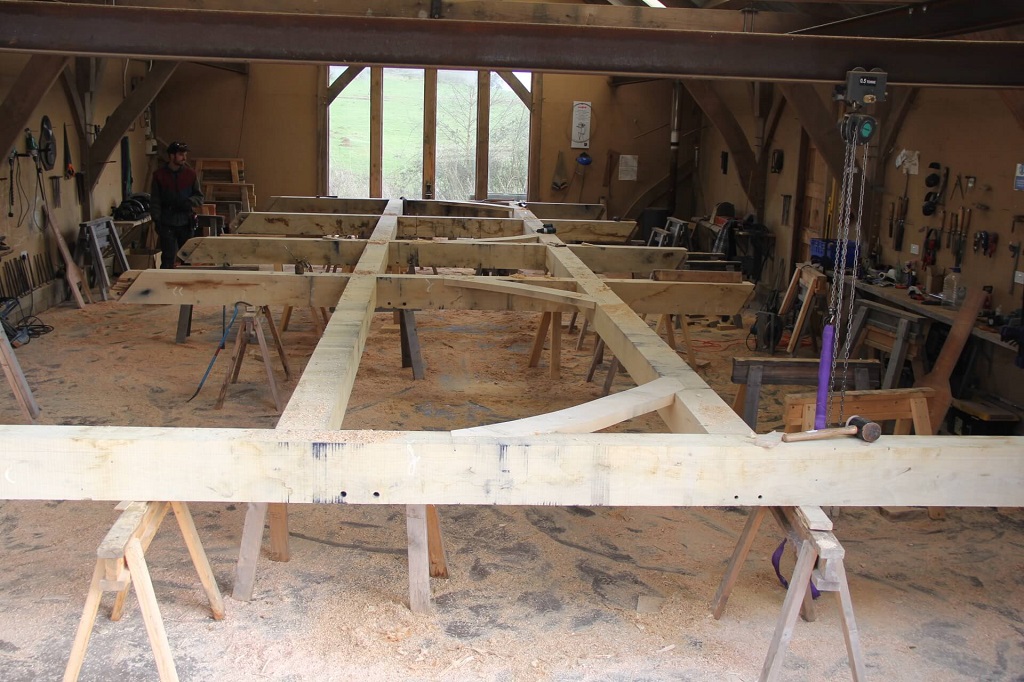 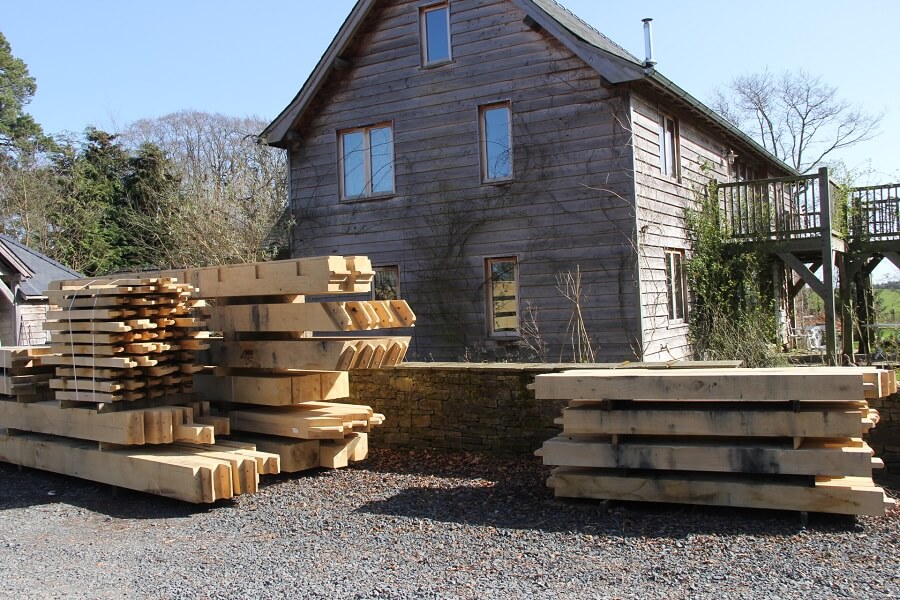 As usual with frame raisings, as the time approached, so our apprehension grew. So many things have to come together for a raising that at times it feels an almost impossible task. Will the groundworks be accurately set out to receive the frame? Will the scaffolding have been erected correctly? Have we made enough oak pegs? 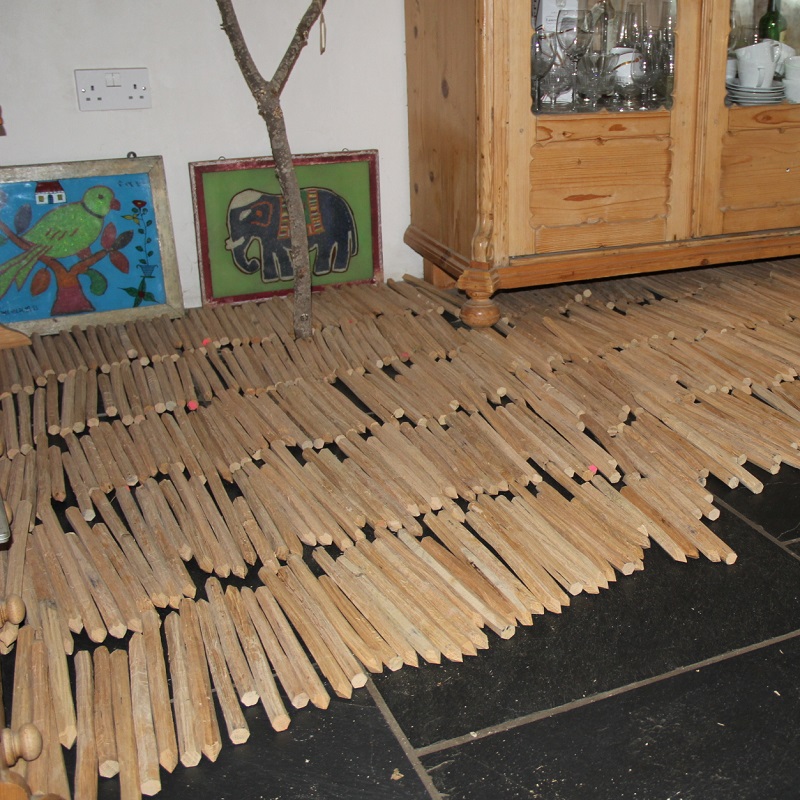 Have we remembered the oak pegs? Will the crane turn up? Will the weather be kind to us? Would there be any tea and biscuits? See what I mean?

We motored past the Lake District along the M6, taking in the spectacular Cumbrian scenery, and arrived on Monday evening in time for a quick site inspection with Andy and Sue, ready for an early morning start the next day

You’ll be pleased to know the groundworks were spot on, the scaffolding perfect, and the oak had already arrived and been offloaded. So far so good

Next morning the crane arrived with Graham our operator for the next 2 days, and we ran into our first real issue – the crane’s stabilising outriggers on the one side were pushing through the stoned ground and disappearing into peat bog! If we couldn’t safely stabilise the crane, the frame wouldn’t go up. We needed railway sleepers. Lots of them. Strangely and fortuitously enough, Andy had an impressive railway sleeper collection in his garden which we were able to pilfer, and we kept stacking them below the crane’s outriggers until they stopped sinking. We had lost valuable time at the start of the day, but at least we could begin to assemble the frame

The weather was set fair, we pinned up the drawings, sorted out the multitude of curved braces and made a slow and steady start. As is usually the case when we raise frames, taking photos of progress gets forgotten due to time pressures and our frame sequence generally follows the same pattern 1) picture of open site ready for frame 2) picture of completed frame. This frame was no exception

So here’s a picture of the scaffolding…. 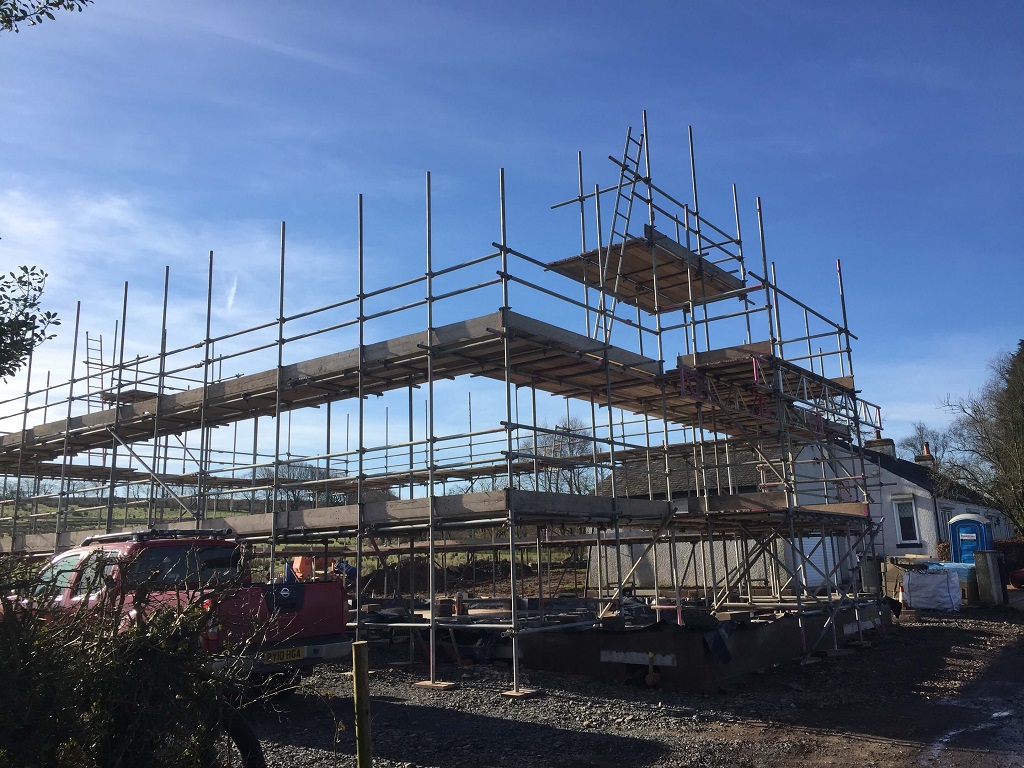 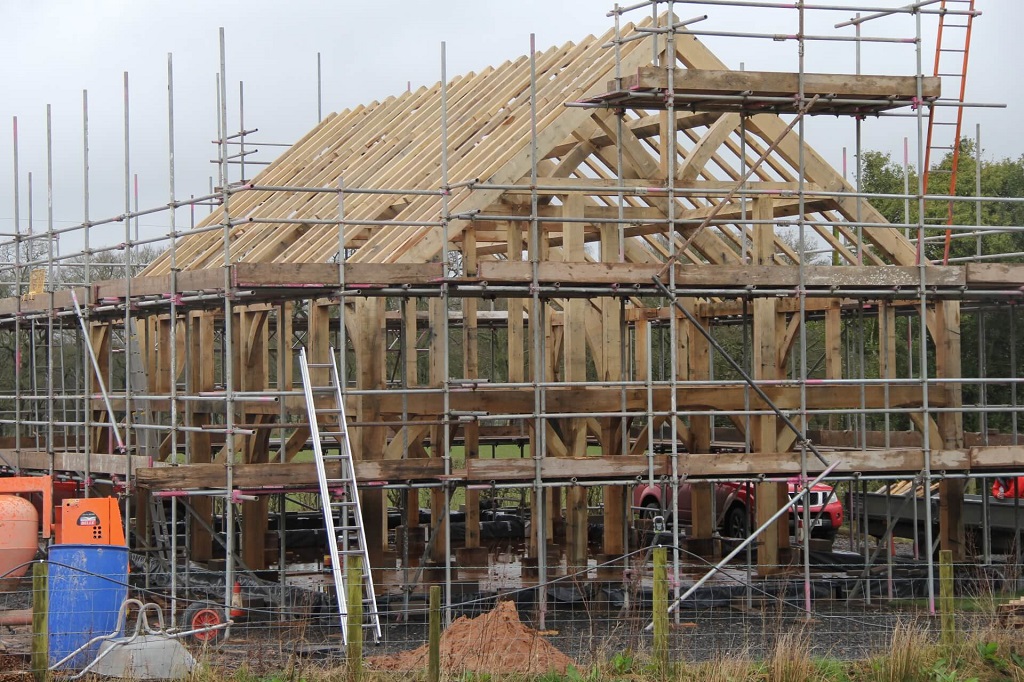 In between times we lifted in bay posts, girding rails, floor beams, wallplates, trusses, floor joists, purlins, ridges and rafters, at times in the dry, but more often than not in the driving rain. By the end of the first day we had raised the main frame including the trusses, on the 2nd day we lifted in the double purlins and ridge using the crane, along with all the floor joists by hand, and finished knocking in the 700 oak pegs. By mid afternoon on the 3rd day we had fixed the common rafters to the roof and invited Andy to “top out” the frame with an oak branch scavenged from a nearby hedgerow. 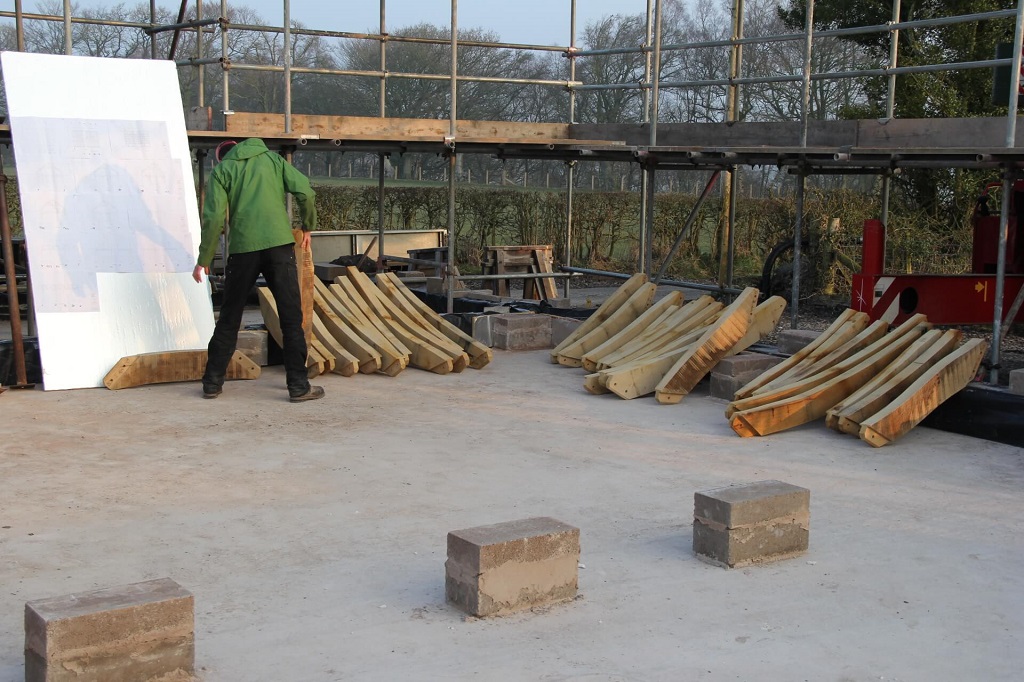 Jake sorting out the numerous braces 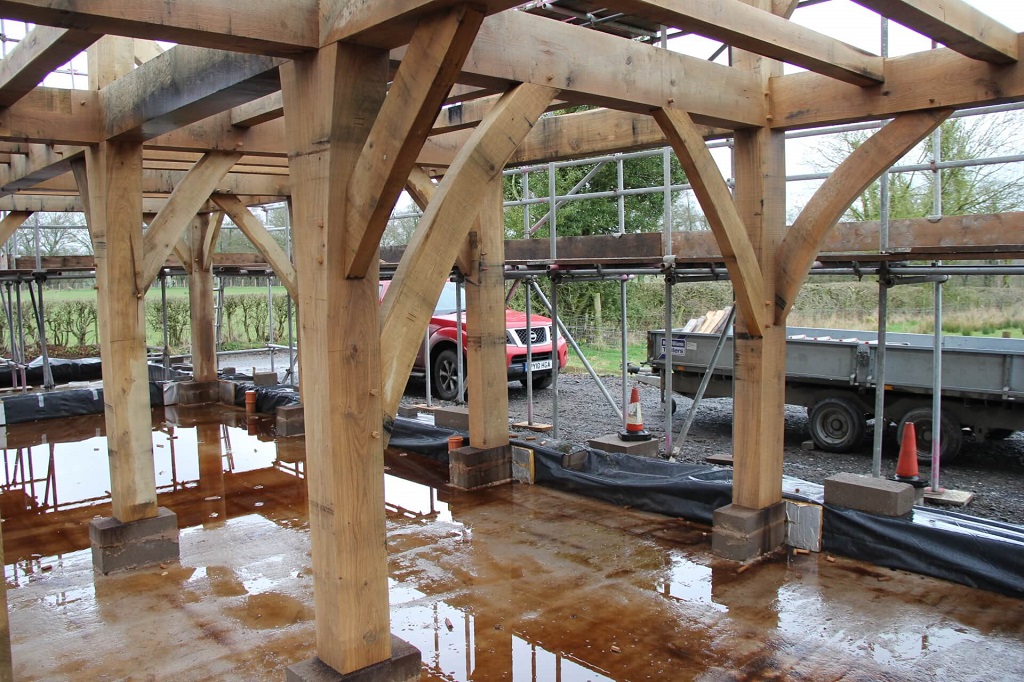 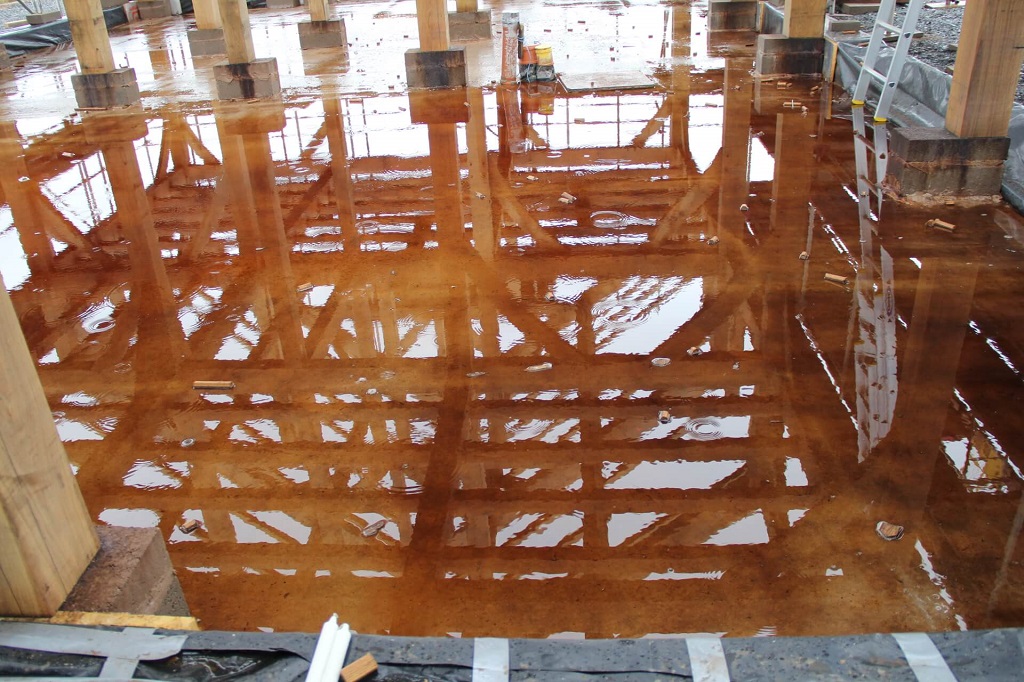 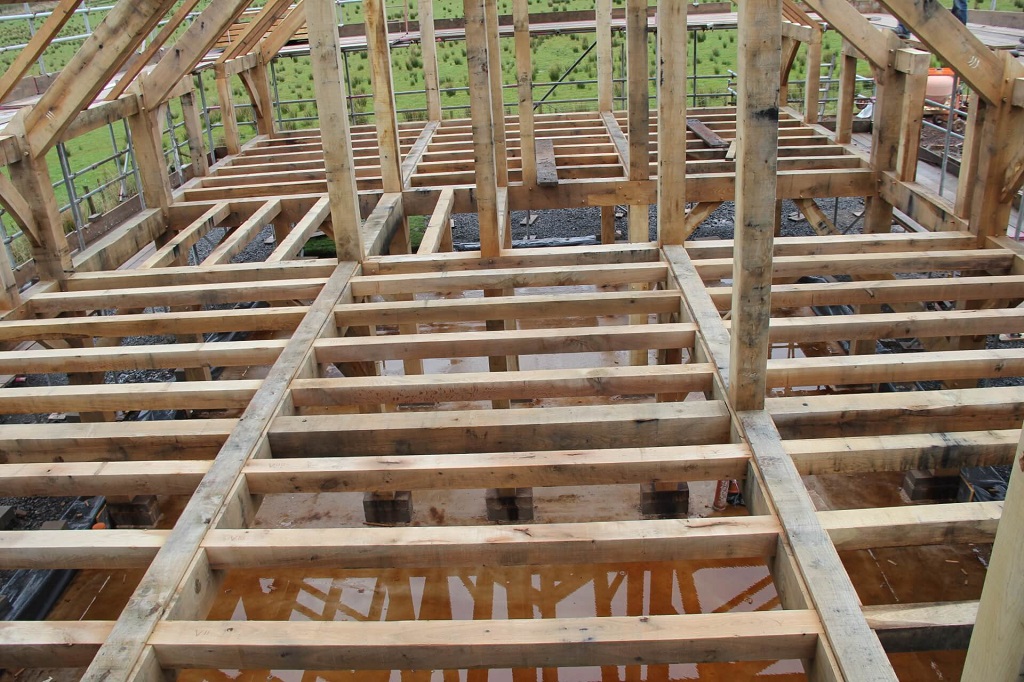 Floor joists dropped into their housings 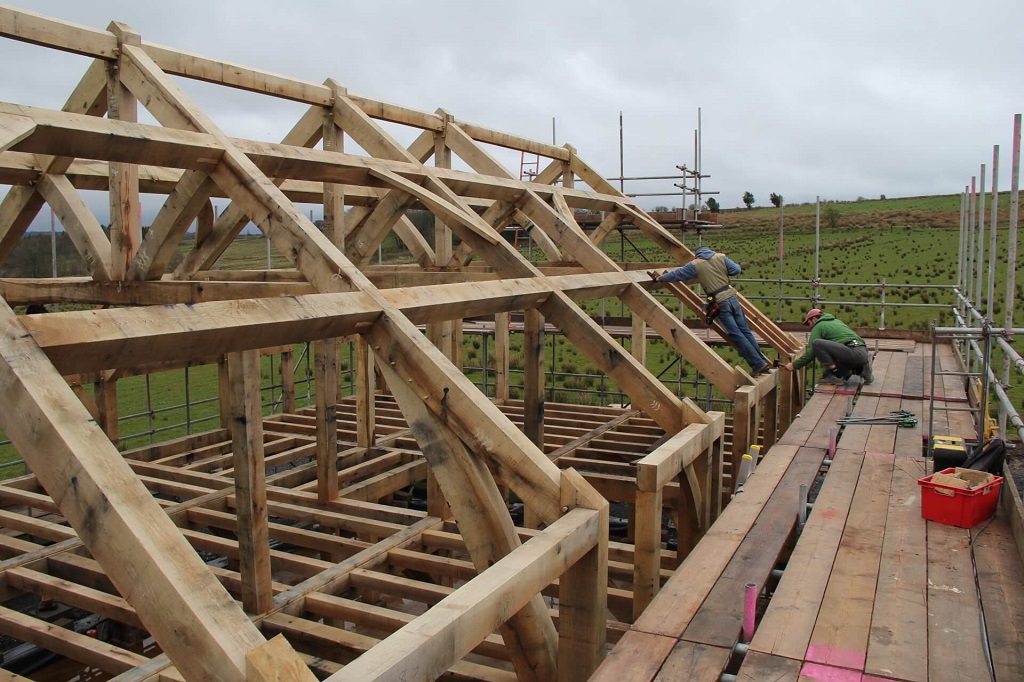 Making a start with the rafters 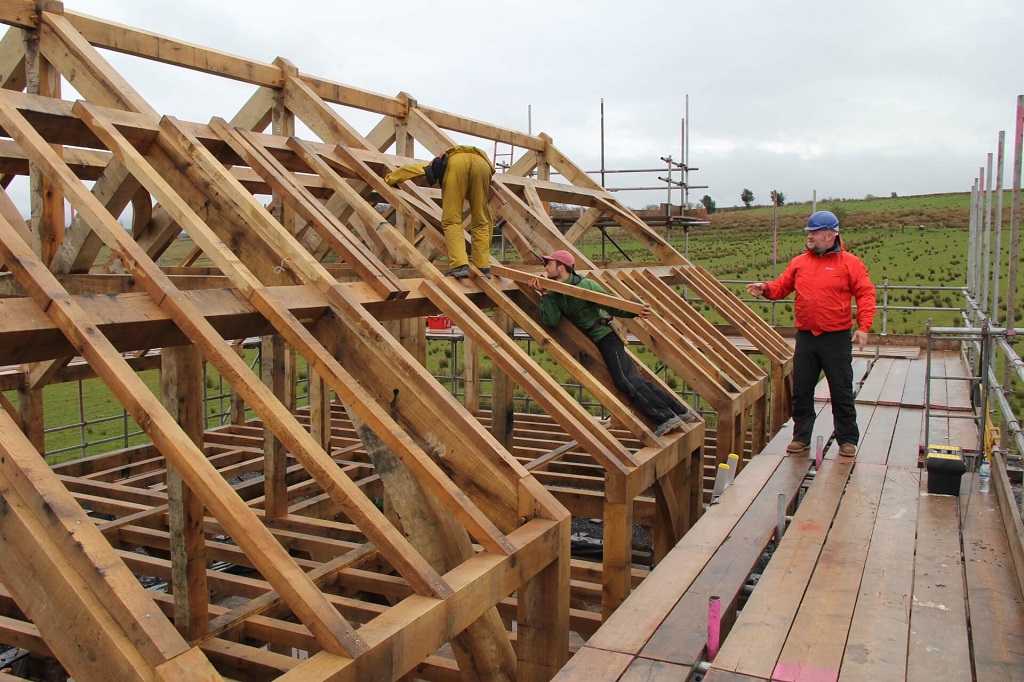 Andy helping out on the roof 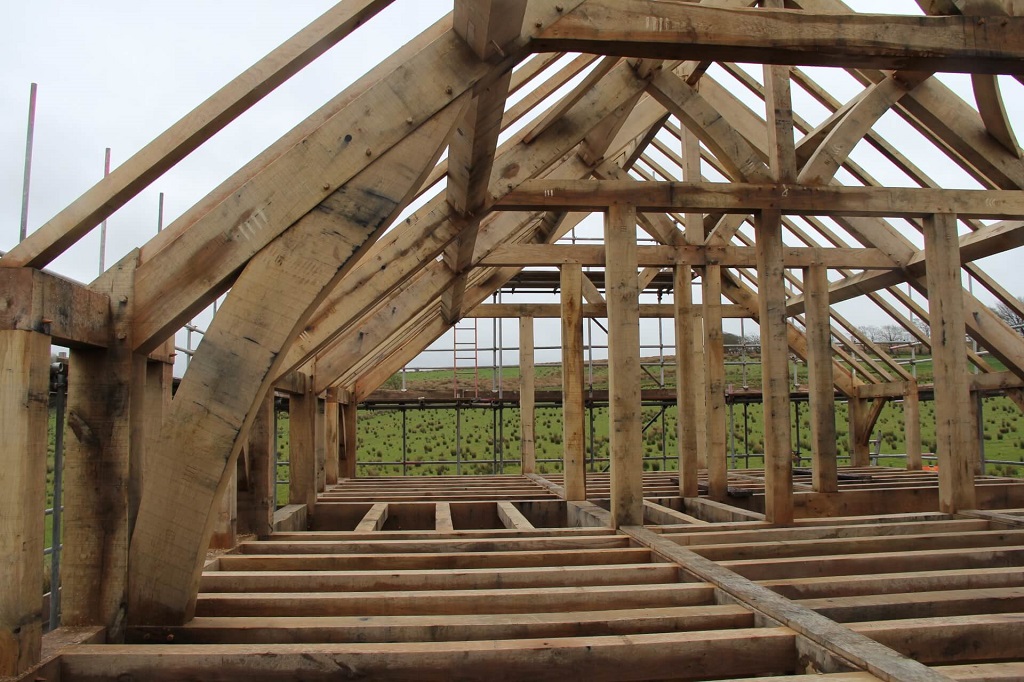 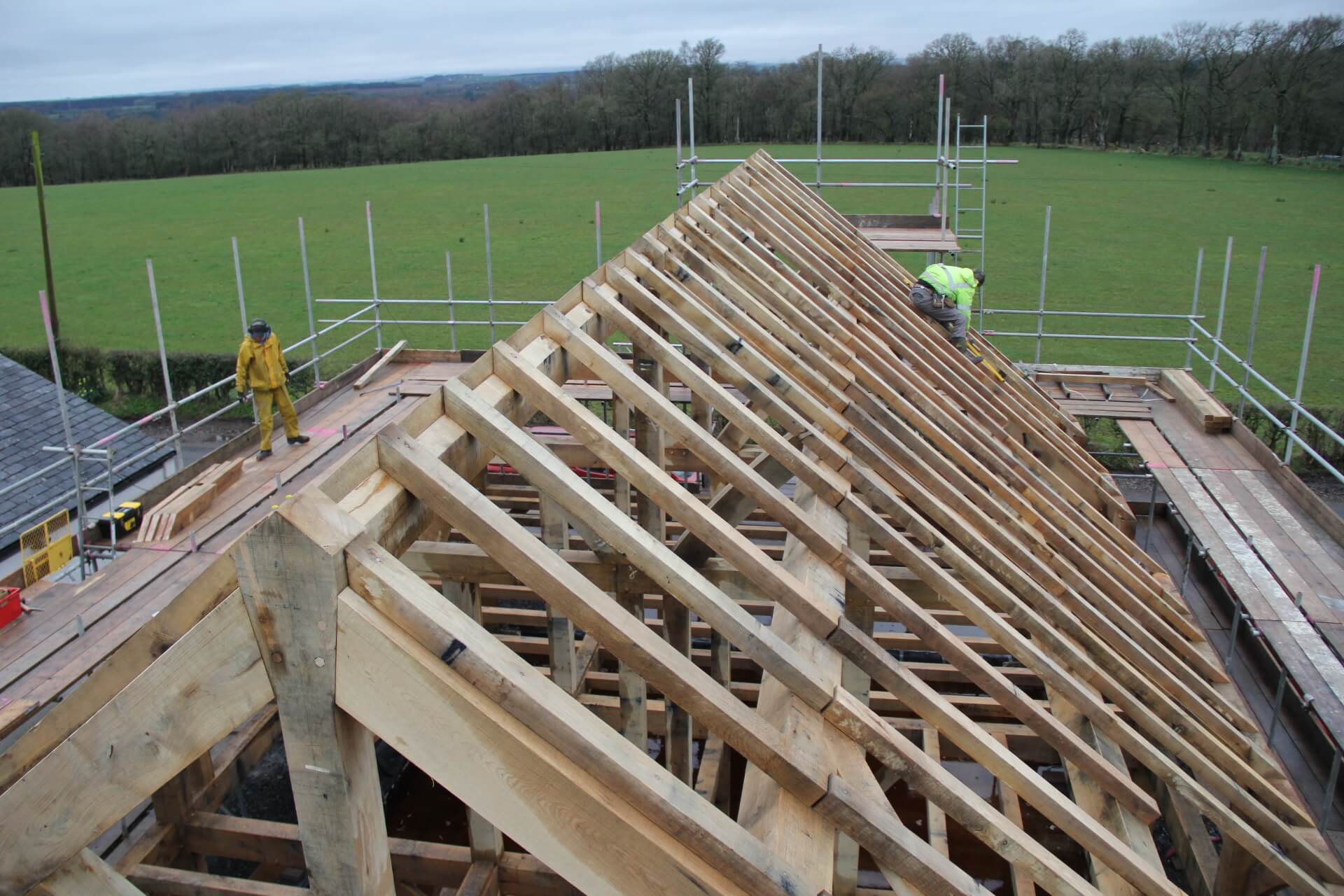 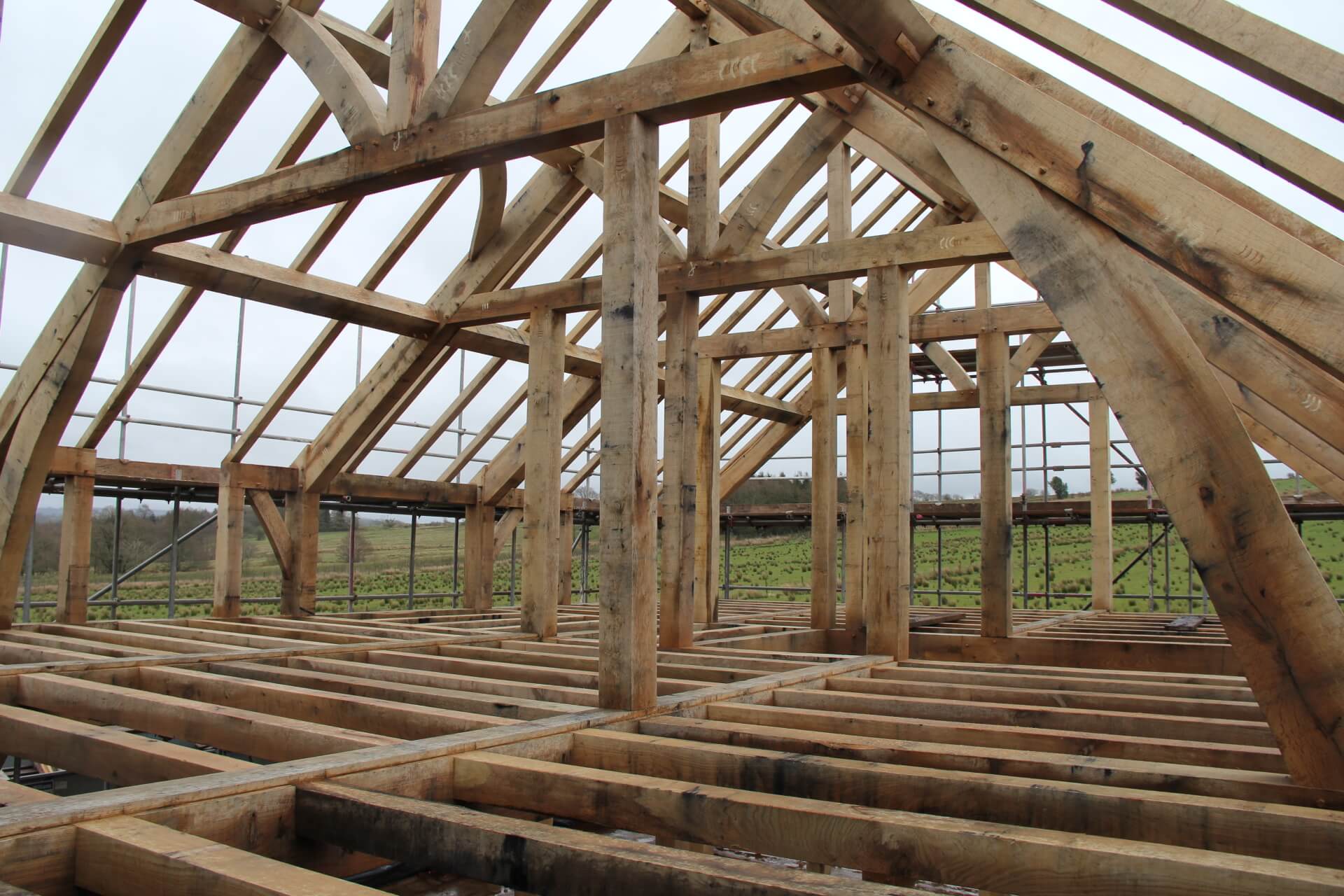 View through the upstairs 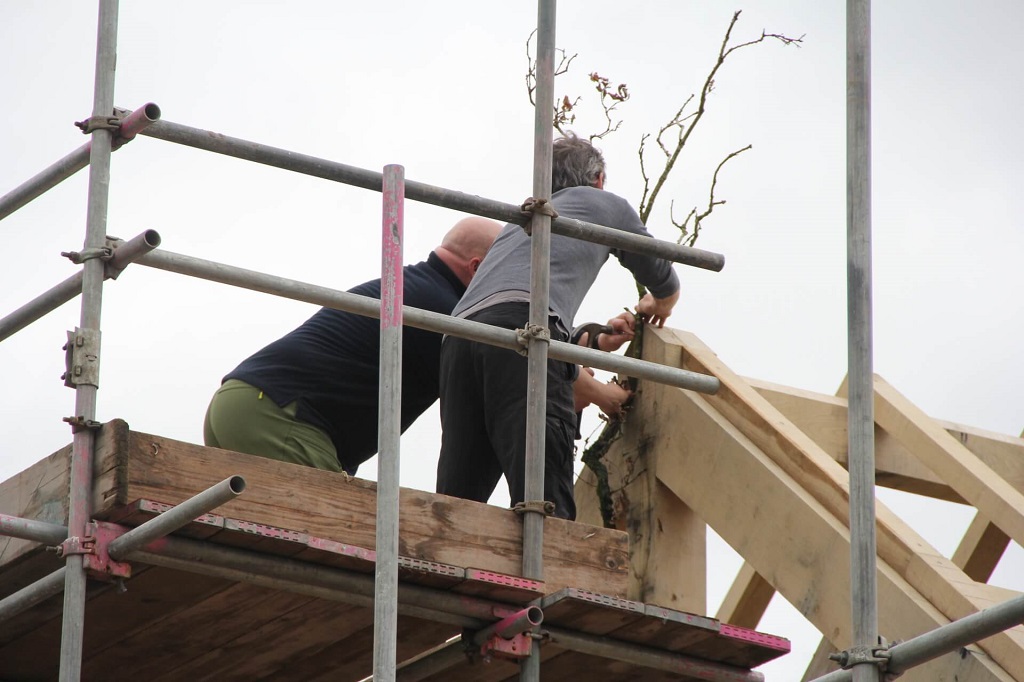 Andy and Rob topping out the frame 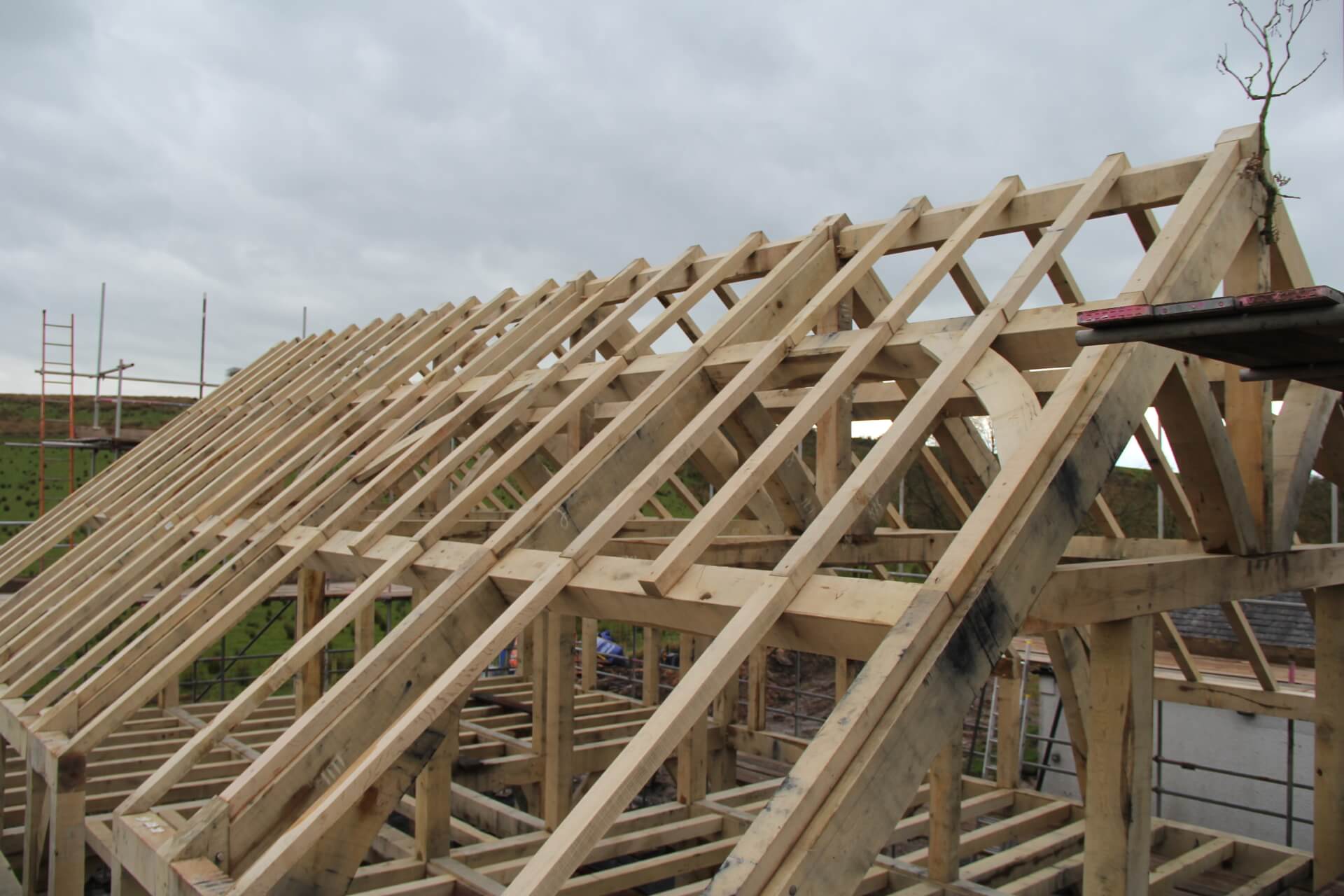 The roof is done 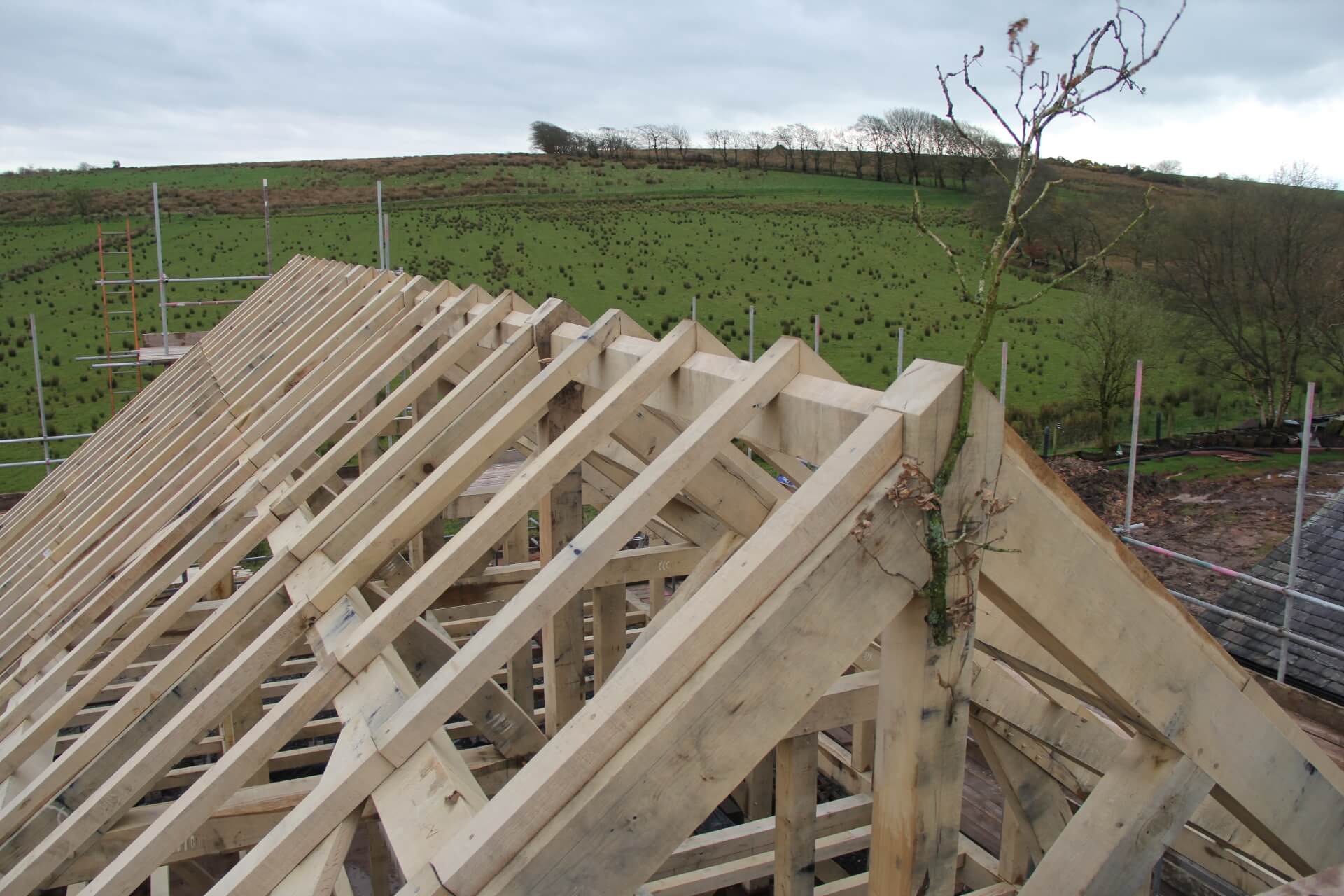 View from the top

Sue kept our spirits up and our soggy bodies going throughout with a constant supply of bacon butties, cups of steaming hot tea, muffins, scones, tea cakes, haggis (yes really!) and best of all, the amazing, never to be forgotten self-filling box of chocolate biscuits, which replenished itself constantly and mysteriously for three whole days. 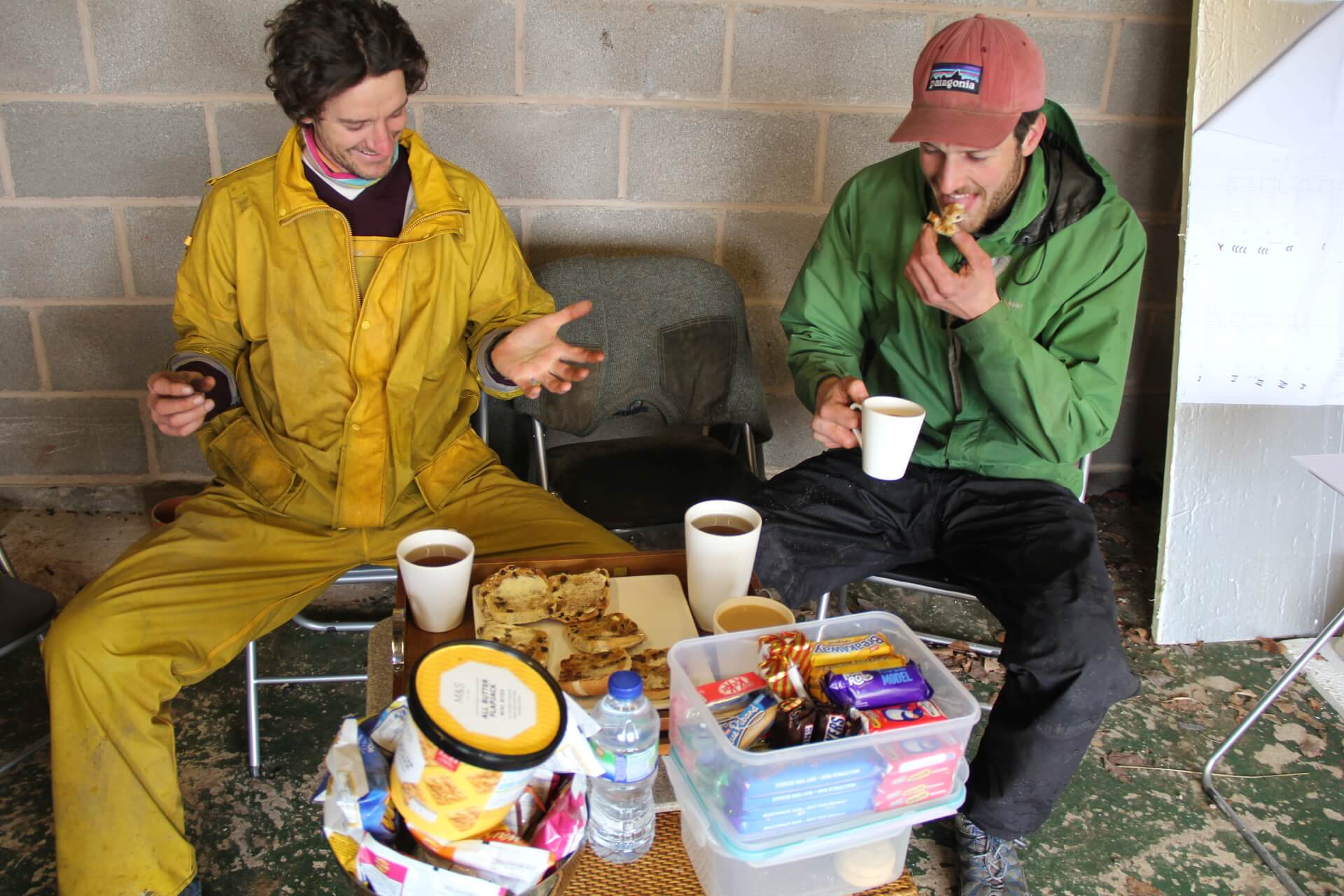 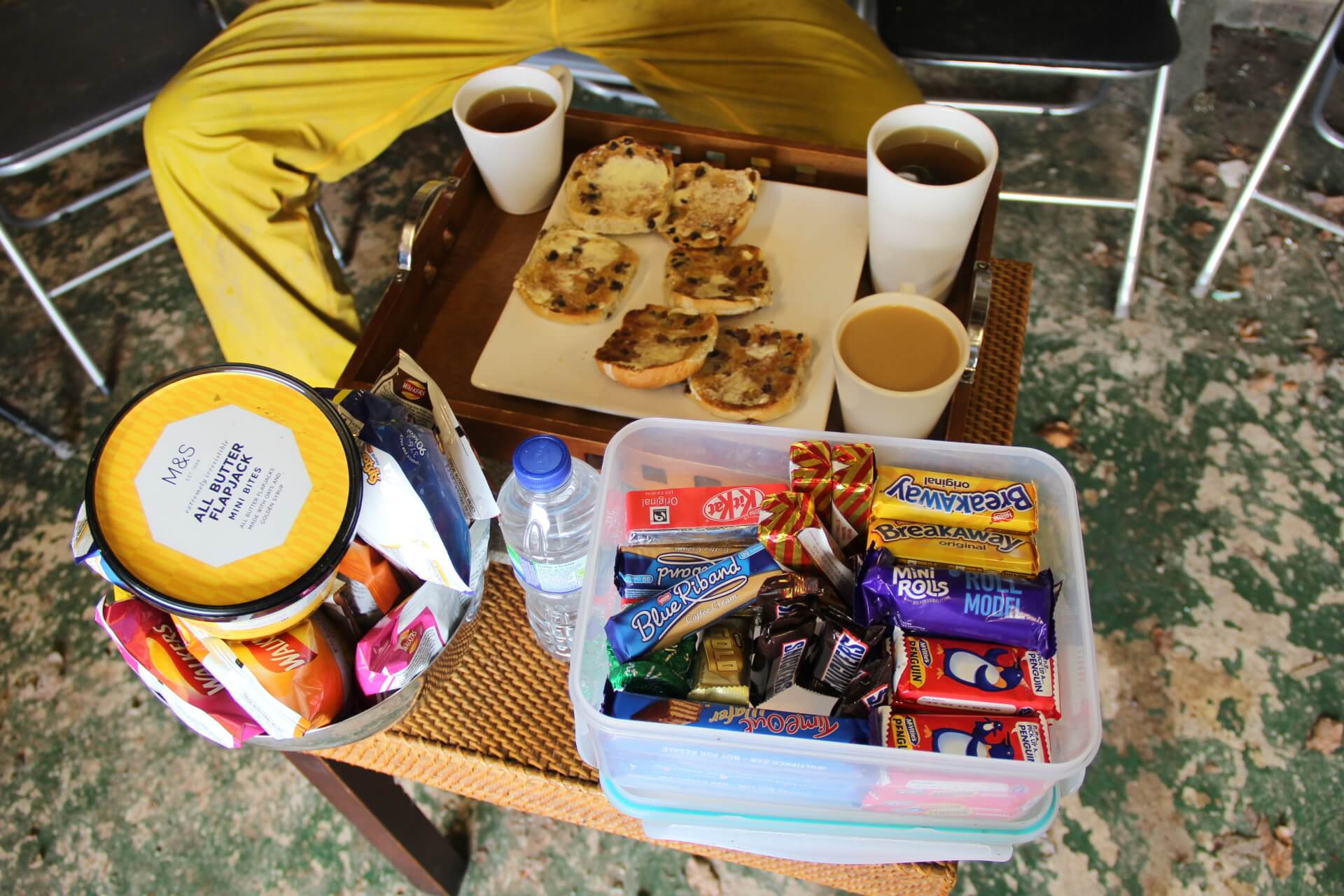 The magic chocolate box – every frame raising needs one